Statement of Scott B. Sanders Before the Committee on Finance, United States Senate

Chairman Grassley, Ranking Member Wyden, and Members of the Committee, on behalf of the National Association of State Workforce Agencies (NASWA), I thank you for the opportunity to testify and submit written testimony to discuss the efforts made by our members to provide essential unemployment insurance benefits to workers who have lost their jobs because of and during the COVID-19 pandemic.

The members of our Association are state leaders of the publicly funded workforce development system including the unemployment insurance (UI) program. NASWA serves as an advocate for state workforce programs and policies, a liaison to federal workforce system partners, and a forum for the exchange of information and practices. NASWA is a private, non-profit corporation, governed by a Board of Directors elected from the Administrators of the state workforce agencies. We are nonpartisan and our membership includes all fifty states, the District of Columbia, Guam, Puerto Rico, and the Virgin Islands.

Our dedicated members have been working tirelessly to implement the new unemployment insurance programs under the CARES Act which was signed by the President on March 27, 2020, just over two months ago. The new Federal Pandemic Unemployment Compensation (FPUC), the additional $600 to be made with other UI payments, was implemented by all states by the end of April. The new Pandemic Unemployment Assistance program (PUA) requires state UI programs to pay self-employed individuals on a state-wide basis which has never been done before in any state. Our information is that thirty-eight states and the District of Columbia paid PUA by the end of April and all states by the end of May.

Claims both in the regular programs and the new UI programs have increased drastically. In February 2020, the average number of weekly payments was 2.1 million. By May 2020, the average number of weekly payments skyrocketed to 29.4 million. In contrast, during the Great Recession, the peak was just 11.7 million (See Figure 1). No entity, public or private, would reasonably have contingency plans in place for this scenario to which states have responded, yet our member agencies have continued to work through these overwhelming workloads tirelessly, and with great dedication. Against this backdrop, I will highlight three of the primary challenges that states are experiencing during this UI crisis: Promoting Integrity, Trust Fund Solvency, and Administrative Funding (to handle the increased volume, including the area of information technology (IT) systems).

Our members work hard to assure the integrity of the unemployment insurance program. An important part of integrity is making sure that key program components are easy for claimants to understand and for agencies to administer.

As a result of the large number of regular UI state and PUA claims, states are seeing a rise in fraudulent activity. There are four significant factors that have contributed to the increase. First, despite rules allowing states 21 days to make payment, there is intense public pressure to issue payments quickly. Second, the large number of incidents over the past few years where massive amounts of stolen personal identifying information has occurred. Third, the lack of individual employment data for states to verify PUA claims. Finally, the ability of claimants to self-certify eligibility for a PUA claim.

As states rapidly adjust to these new and increasing threats, the IDH is playing an integral role. The IDH is an innovative data and information sharing system that for the first time allows states to immediately compare mass volumes of claims with each other. The IDH allows for use of a suspicious actor repository, suspicious email domains, multi-state cross matching, monitoring foreign and suspicious IP addresses, and fraud alerting. In addition, the IDH harnesses the power of the investigative work of all states for the benefit of each individual state as they report their findings. States are acting quickly to utilize the IDH, and as they increasingly begin using this system, the national fraud schemes we have seen recently will be detected in all states as soon as they are detected in one state.

These cross state collaborative efforts will continue to enhance NASWA and its members’ ability to promote nationwide efforts on the integrity of all UI claims.

Recessions offer significant challenges to maintaining adequate state UI trust funds due to increased benefit outlays, extended durations of claims, and declines in taxable payrolls resulting in decreased UI revenues. The crisis currently facing many state UI trust funds is unlike anything in the history of unemployment insurance. During the Great Recession, thirty-six states depleted their trust funds leading toward the ultimate cumulative borrowing of $51.2 billion from federal general revenues to finance regular UI benefits.

Adding to this concern, states have already collected approximately 65 percent of their tax revenue for 2020. With the dramatic increase in weekly claimants, the outflow of benefits will far exceed the deposits, exacerbating the declining trust fund balances.

To determine UI tax rates for employers in 2021, the level of the state’s trust fund is a key variable in setting the applicable tax rate. This determination is usually done between July to September, so the status of each state’s trust fund in the next few months will have significant bearing on next year’s tax rate. With drastically lower balances, we can expect significant increases in UI tax rates in most states, which will hamper businesses as they try to bounce back economically and generally hinder our economic recovery.

There are two options for Congress to consider in averting this impending trust fund crisis. First, Congress could enact legislation to forgive trust fund loans made to states this year or next. Providing loan forgiveness would help ensure employers avoid layoffs that would otherwise occur, due to an increase in employer UI taxes.

Another option would be for Congress to direct a federal payment to state UI trust funds, which would provide immediate support. Funds could be distributed to the states by using the formula process as done with administrative funding or a Reed Act (P.L. 83-567) distribution – this approach was utilized to address a rapid increase in unemployment after the 9-11 attack (PL 107- 147 Section 209).

3. Administrative funding including need for funding for IT systems

In 2010, the week ending January 2nd was the peak week of claims payments during the 24 months (May 2008 to April 2010) of the Great Recession (Figure 2). States paid a total of 12.1 million claimants with roughly 6.0 million in regular state UI claims, along with 5.6 million claimants in Emergency Unemployment Compensation (EUC), a new program at the time. In addition, states had to add an additional $25 Federal Additional Compensation (FAC) to each claim.

For comparison, last year for the week ending May 11, 2019, states paid a total of 1.6 million claimants. State workforce agencies’ staffing levels reflected these lower claim levels. These reduced staffing levels were also a result of flat lined funding prior to the pandemic.

In sharp contrast, the week ending May 16, 2020, states paid a total of 30.0 million claimants with roughly 18.9 million in regular state UI claims, along with 10.7 million claimants in Federal Pandemic Unemployment Assistance (PUA), a new national program. In addition, states were asked to add the FPUC $600 to each claim. These phenomenal increases in claims explain some of the extraordinary challenges states have faced in processing and paying UI claims during the pandemic.

Through this crisis and the rising number of claimants and new programs, states have made significant changes in the way they operate their UI programs. States have waived work search and other requirements to ensure that individuals who have lost their jobs are not penalized by the pandemic. States have mobilized new call centers; hired, borrowed, and outsourced staff; and purchased new and/or modified existing IT systems. While the additional $1 billion funding provided to the states in the Families First Coronavirus Act has assisted states to meet the challenges of the CARES Act, there is more that needs to be done to manage the continued downturn and future recessions.

UI Administrative funding continues to decline in real dollars relative to the growth in the number of claimants covered in the program. The administrative funding factors used to determine the actual costs of providing adequate funding levels for state operations remain largely unchanged since the mid-1980’s. An example of this steady erosion in the funding is evident by a specific line in UI appropriation language which is particularly critical now, “an additional $28.6 million shall be available for obligation for every 100,000 increase in the AWIU level”, a dollar amount which has remained unchanged since the mid-1980’s. A simple inflation adjustment to the dollars per 100,000 claim increase would almost double the amount of marginal funding available to states to administer the program during the current COVID-19 period.

Since the early 2000’s states have been required to annually report to the USDOL an estimate of the funding levels they need to run an effective program. Because of budget and appropriation limits (outside of state control), the estimated funding levels have never been achieved, forcing states to constantly understaff and under resource their operations. This year-to-year underfunding has cumulatively affected states’ abilities to make capital investments, specifically in IT resources.

As Congress addresses the immediate need to provide additional funding for state UI operations, NASWA also recommends updating the basic methodology of the administrative UI funding process to ensure a strong UI system that will meet today’s needs as well as the needs of potential further recessions.

In closing, as Congress considers extending or adding new programs, NASWA and our member states look forward to working with you to ensure that integrity is maintained and that any extensions or new programs for claimants are delivered in an efficient and timely manner.

Thank you for providing this opportunity to testify on the three important issues of Promoting Integrity, Trust Fund Solvency and Administrative UI Funding. NASWA looks forward to continuing to work with the Committee to address the needs of our member states, jobseekers, and employers during these challenging times. 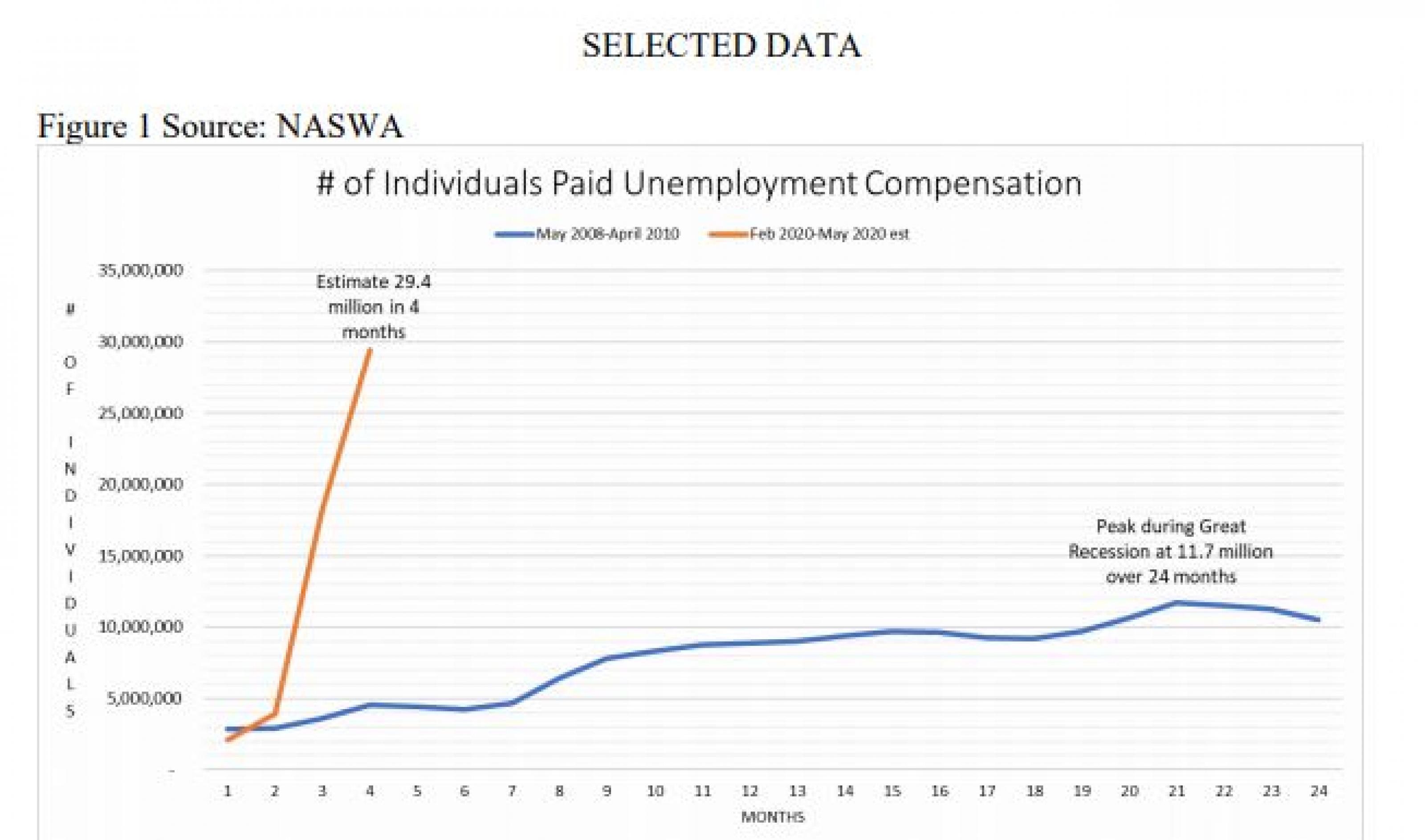 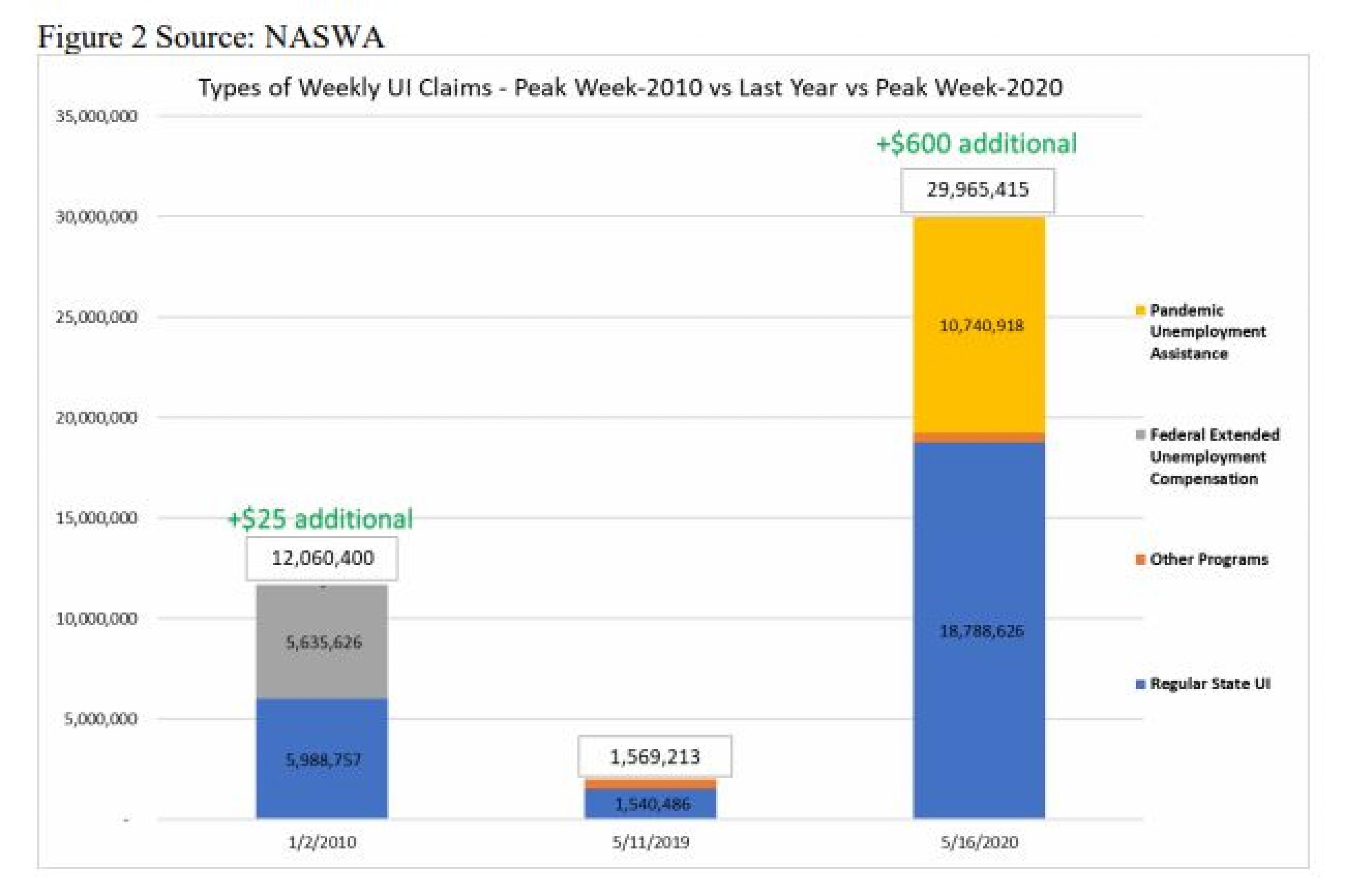